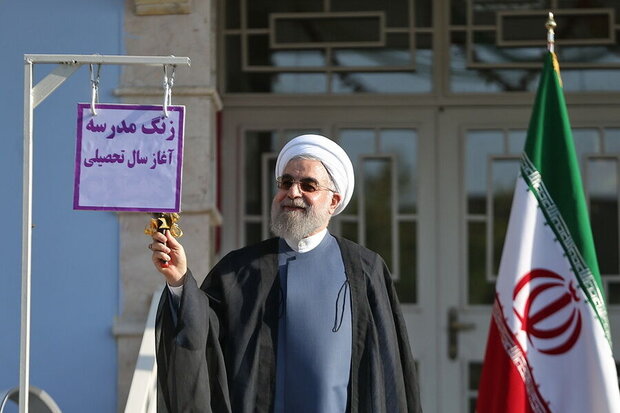 TEHRAN, Sep. 23 (MNA) – Iranian President Hassan Rouhani rang the bell at a girls’ high school in downtown Tehran on Sunday in a symbolic gesture to mark the first day of the school year in Iran.

Iranian students start the school year on September 23, which marks the first day of autumn on the Iranian calendar, after three-month summer vacation.

The back-to-school ceremony is officially inaugurated by the president aaeach year, as he rings the bells in a symbolic gesture at a chosen school. This year, more than 100,000 schools and educational centers opened across Iran on Monday, offering curriculum in a variety of subjects to some 14.4 million students.

Speaking on Monday at Hazrat Khadijah (SA) Girls’ School in Tehran, Rouhani said that “Education budget has increased 3-fold since the beginning of the previous presidential term, and teachers’ salary has increased 4-fold.”

Posing the Mehr Question, which is annually raised for a nationwide competition between students, Rouhani asked “What can we do to have a more vibrant, pleasant, and safer atmosphere at schools?”