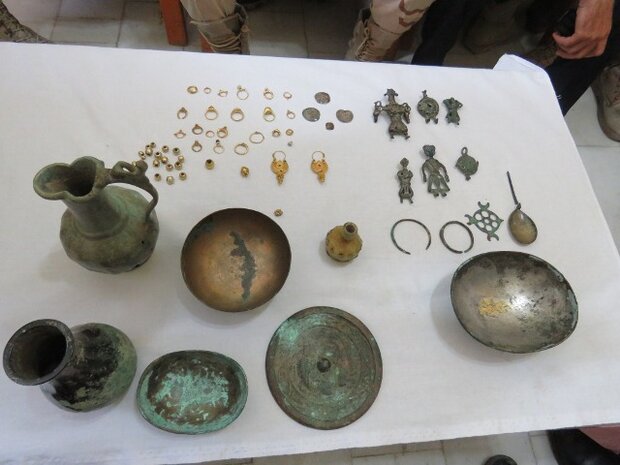 TEHRAN, Sep. 07 (MNA) – Head of Law Enforcement Force of the northeast Iranian Province of Golestan announced on Saturday that 40 different antique objects, dating back to 1,000 years ago, have been discovered and confiscated in Gonbad-e Kavus, Golestan province.

Following comprehensive intelligence activities, some 40 pieces of ancient objects including coins, dishes and bracelets have been discovered and seized in Gonbad-e Kavus, Genreal Rouholamin Ghasemi said.

“According to the experts, the discovered objects are 1000 years old,” he added.

On September 2, Iranian authorities seized 47 pieces of gold plaques dating back to pre-Islamic era, which were kept unlawfully by smugglers in Zanjan, western Iran.

“51 objects, including 47 gold plaques, were recovered from smugglers while making a deal,” Abolfazl Moradi, a police official in charge of protecting cultural heritage.

Iran is a major center of ancient culture. It is rich in valuable natural resources, especially metals, and played an important role in the development of ancient Middle Eastern civilization and trade.

From prehistorical times, Persia (Iran) was home to talented and well-trained artisans and goldsmiths who were able to produce intricate yet delicate jewelry without any modern tools. They made everything from necklaces and bracelets to finger rings, anklets and hair pins in both gold and silve